The Lawrence Schools Foundation began managing the funds for the Allen Press Distinguished Teaching Award in 2008.  From 2008-2011, a teacher at both Lawrence High School and at Free State High School were selected for the award. Since 2012 only LHS teachers are eligible for the honor. Teachers are nominated by LHS honors students and finalists are presented at the school’s Senior Recognition Ceremony each Spring. The students read their nomination and the recipient is announced at the event and presented a $500 check. 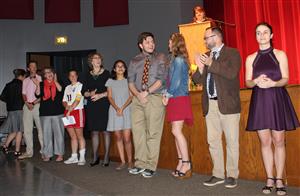